More than any professional rider before him, Valentino Rossi has treated the shells of all his helmets as a blank canvas, each race a chance to celebrate wins and titles or give unique expression to emotions. Since Valentino Rossi’s world championship debut in 1996, many AGV models have taken a turn on the champion’s head, increasingly advanced and with graphics that have always been new. Number 46 has raced with many graphics.

Let’s take a look at the history of Vale’s helmets from the beginning up to the present day.

This is the first helmet of the Rossi era, the Doctor’s first unforgettable Soleluna (sun and moon) graphics. The AGV Q3 Pro (Professional) is developed from the previous Q3, which in turn was developed from the Quasar, developed together with Wayne Rainey. It introduces teardrop-shaped air vents on the front and an extractor at the top. The shell is a combination of carbon fiber, aramid fiber and fiberglass. This helmet accompanies Valentino to his first successes in 1996 and to his first world title in 1997. In addition to the first of the many Soleluna versions, we recall the special Suzuka 1997 graphics.

The 250 debut, the second world title, the transition to the premier 500 class and then MotoGP™ are the milestones that Valentino races past wearing the AGV X-Vent, developed from the previous Q3. The new helmet is made of composite fibers, carbon and fiberglass, distinguished immediately through the presence of the large air vent on top of the shell and the two ventilation channels running to the back of it.

Among the many special designs on Valentino’s X-Vents are Imola ’98, the helmet for the second world title in 1999, the unlucky Mugello ’01, Mugello ’02 and the Rio 2002 rainbow, for the fourth world championship title.

The AGV Ti-Tech is a completely new helmet that accompanies Rossi in the seasons that see him dominate the world championship completely, lastly with Honda and at first with Yamaha, between 2003 and 2005. Made of a composite material – aramid fiber and carbon – it introduces the first metal air vents (titanium), to ensure the utmost safety even at the openings on the shell. The visor features the XQRS (Extra Quick Release System) for quick, tool-free visor replacement.

Its unforgettable graphics include the floral ones for Valencia ’03, the ‘wooden’ helmet for Mugello ‘04, Che spettacolo (What a show) for the sixth title the same year, then the celebrations at Laguna Seca and Valencia 2005 and the seventh title at Sepang, also in 2005. 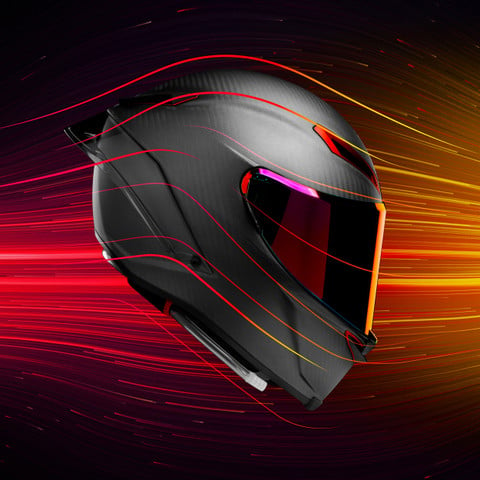 The GP-Tech arrives in 2008, the year in which Valentino regains the MotoGP™ title. Once again, the design is completely new, compared to the previous helmet. The SSL (Super Super Light) shell is made of fiberglass, carbon and aramid fiber with an elongated shape at the rear to enhance stability at high speeds when not tucked in. The air vents are built into the profile of the shell itself as well as EPS with differentiated densities. GP-Tech inherits the old Ti-Tech’s XQRS, the tool-free Extra Quick Release System for the visor.

The style of the graphics is also new, starting with the innovative version of the Soleluna. Among the most iconic and memorable are the helmet with Vale’s face for Mugello 2008, the chicken with the golden egg for the ninth world championship in Sepang in 2009, the Faces graphics for Laguna Seca 2010 and the first helmets of the Ducati era, including the tribute to Marco Simoncelli for Valencia 2011.

The first version of the revolutionary AGV Pista GP arrives in 2012, a groundbreaking helmet that introduces new concepts of protection and aerodynamic performance. The shell is made entirely of carbon fiber, with shape developed in the wind tunnel and rear spoiler introduced for better integration between the bike’s fairing and the hump on the suit.

It’s on Vale’s head for the Sepang winter tests with carbon black graphics, then takes on the Doctor’s colors, updated in 2013. The Wish helmet for Misano 2013 is unforgettable, again in memory of his friend Simoncelli, as well as Misano ci dà una mano (Misano gives us a hand) the following year, which makes its way to the top of the podium, again on the home circuit.

The new Pista GP R version arrives in 2016 and comes with a few tweaks to improve aerodynamic performance. The Biplano spoiler stands out above all the rest, more advanced and complex than the previous solution. It improves the aerodynamic penetration coefficient even more. Two ducts also make an appearance on the chinguard air vents, so that the air is channeled better inside the helmet in racing position.

Among the most distinctive color schemes are the new Soleluna 2016, Mugiallo, Mugello 2016 and Sweet home Misano from the same year.

The latest and most advanced version, Pista GP RR, arrives in 2018. It is distinguished by further aerodynamic fine-tuning for improved air penetration. The new Pro Spoiler replaces the Biplano, for a further increase in the performance and stability of the helmet at high speeds. FIM homologation becomes mandatory for MotoGP™ in 2019. The standard version of the Pista GP RR already complies with this new safety standard, without the need for racing modifications.  Titanium double-D fastening system and 360° Adaptive Fit customizable crown are also introduced.

The new Soleluna 2018 graphics arrive next, then the Italian tricolor graphics for the Mugello 2018 and 2019 GPs, the really colorful Winter Test 2019, in 2021 the last version of the helmet for the season, then the helmet with a pink bow, to greet the imminent arrival of Valentino’s firstborn daughter.

Over twenty-six seasons there have been almost 100 different color schemes on the various AGV shells that have spanned the years. This visual language has developed together with the champion and sets him apart from every professional rider of the past, and maybe the present and the future. 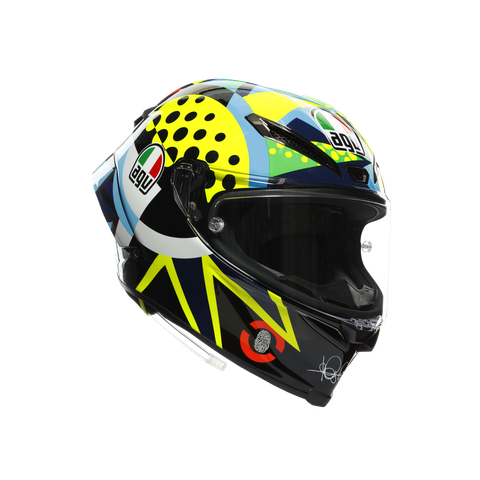 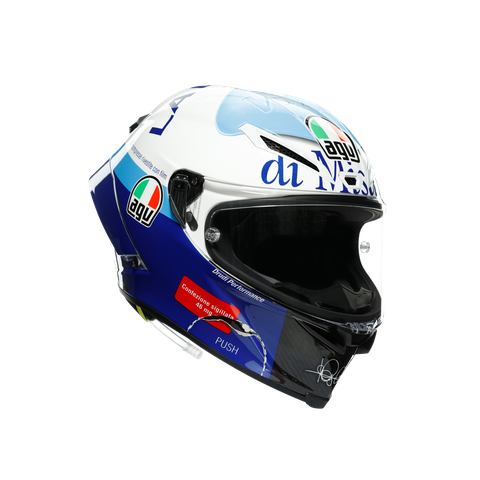 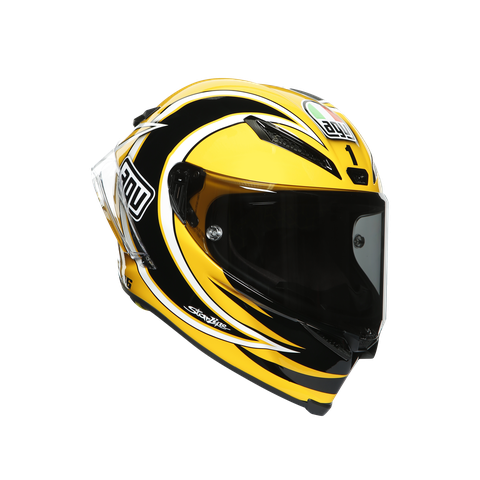 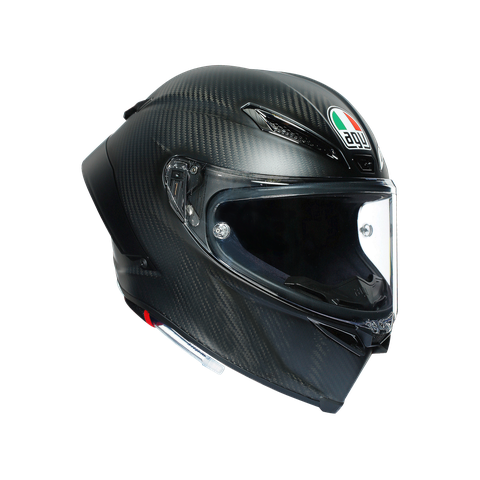