It’s 1946 in Valenza, in the Piedmontese province of Alessandria. A small workshop managed by a young Gino Amisano produces leather saddles and helmets for cycling. There are many shoe factories in the area that process this material, and there is a real passion for cycling following World War II. After a year of work, Amisano decides to focus on the world of motors, a sector in rapid expansion. He begins producing covers for Vespa and Lambretta saddles, and then moves on to helmets. This is how AGV was born, the name an acronym of Amisano Gino Valenza.

In an era in which helmets were a rarity, the first AGV models were hand-made in leather and formed around head molds commonly used to shape hats. The hand-made production process meant that they didn’t even complete ten units a week in the early days. But it was an important starting point for a company that was destined to innovate and set the global benchmark within a couple of decades. 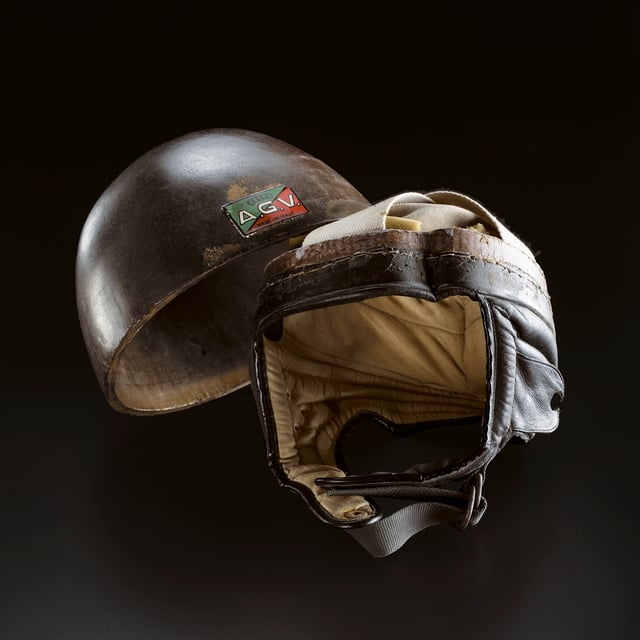 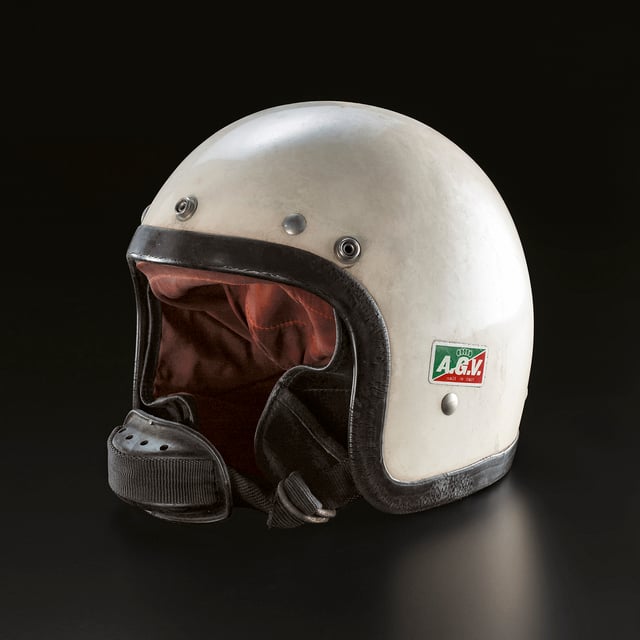 After a brief period of vulcanized fibers, or rather fabrics impregnated with a special resin and hardened with a catalyst, 1954 marked the first Italian helmet to be made with a modern material, the kerized fiberglass AGV bowl, named after the process to which it was subjected.

AGV fiberglass, or “the Kappa fiber that beats everything" as the famous slogan went, soon established itself as safer and lighter, compared to leather or similar materials, which were quickly replaced. A couple of years on and the jet made its appearance, more protective and offering better coverage than the bowl. The first European full-face helmet was presented by AGV in 1967 and immediately offered to top professional riders in the World Championship. Giacomo Agostini was the first ambassador of the full-face model, and it was from here, or rather from his tricolor helmet, that development began and continues unabated even now. 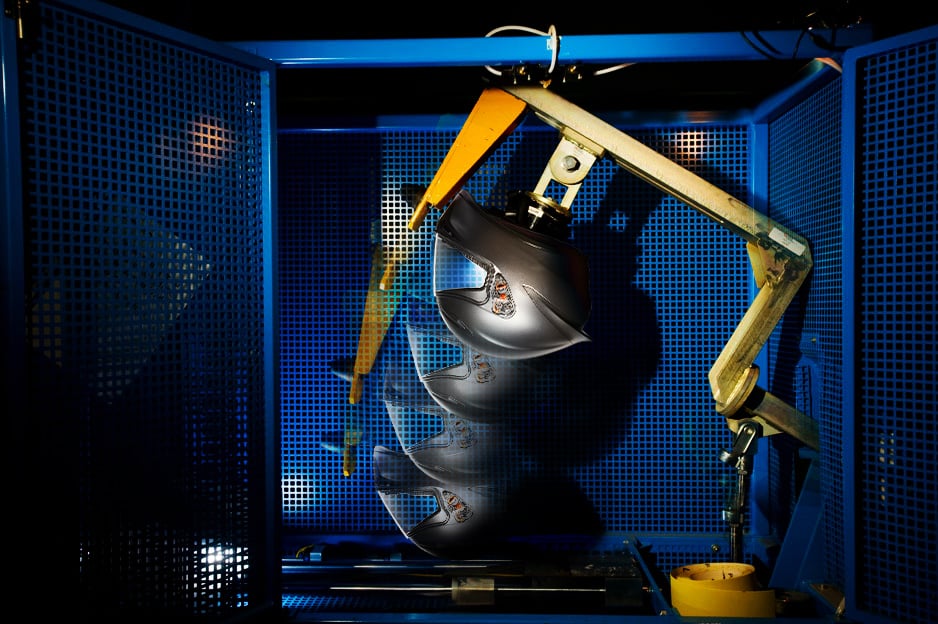 Back in the days of the leather bowl, merely owning a helmet was considered a luxury, as well as a sign of foresight, but today we have reached a point where we not only distinguish between different helmets for different uses, but also differentiate materials according to type of usage.

From just fiberglass in the 1960s, at least three different materials are now available for the manufacturing of shells, namely pure carbon fiber, composite fibers, and high-resistance thermoplastic. Each of these materials already tends to identify the type of helmet we are dealing with.

We should point out that today, the difference between helmets lies in the material which the shell is made of, responsible for dispersing the impact force over as wide an area as possible and resisting perforation. Inside the shell, all helmets contain a thick layer of expanded polystyrene, so-called EPS, which is a material that can absorb impact energy by irreversibly compressing itself. 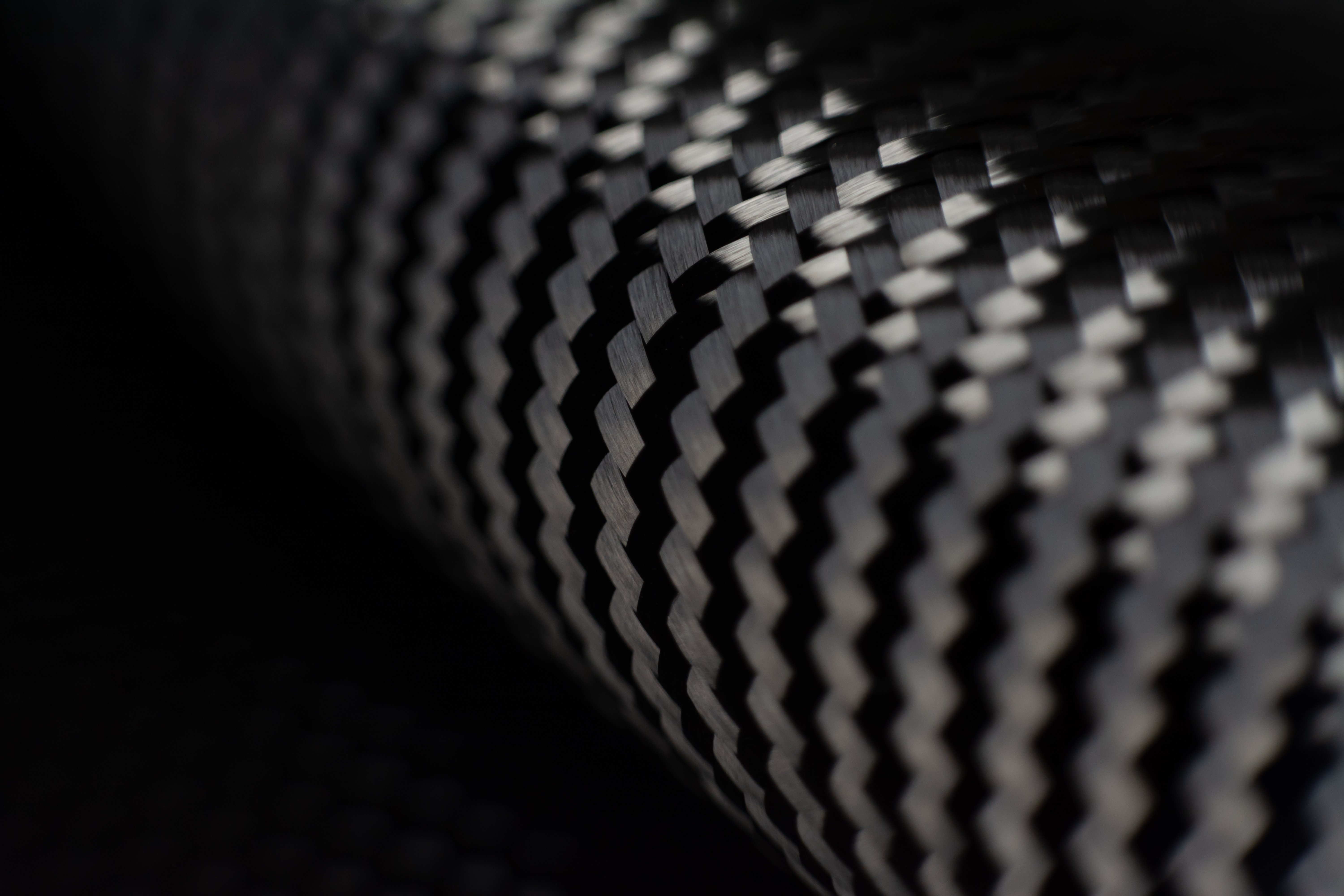 The black gold of helmets

Carbon fiber is the most sought-after and valuable material and offers unbeatable properties. Carbon shells are the result of a careful process to bond filaments composed of carbon atoms and a matrix, a resin whose purpose is to hold the fibers in place, so that they maintain the correct orientation as they absorb impacts, protect the fibers and, of course, preserve the shape of the helmet. It should be pointed out that any material or structure composed of two or more elements should be classified as composite. So carbon fiber coupled with epoxy resin falls into this category, which is usually used to identify different fibers, such as aramid and glass.

One of the main advantages of carbon fiber is its high mechanical resistance, or its ability to withstand different types of stress without breaking. The properties of this material make it possible to achieve maximum safety with reduced thicknesses, so the weight is extremely low. Carbon is used in the manufacturing of top-of-the-range products, often dedicated to track racing though not always. Its lightness also makes it the best choice for long-range touring and off-road helmets. 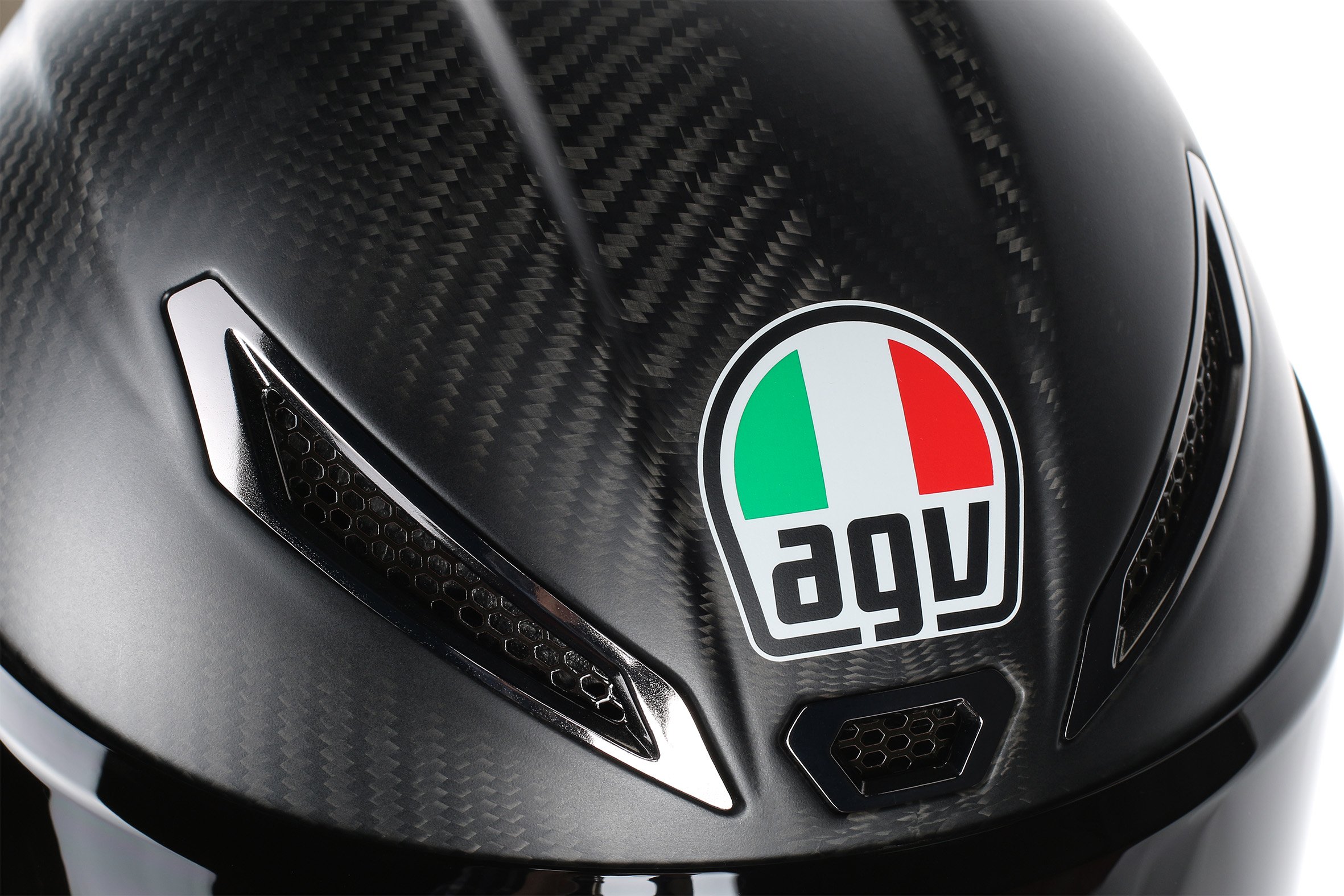 AGV racing helmets, for example, are designed to offer maximum performance on the track, giving the professional rider and the amateur the same levels of protection and performance. An extreme environment like the track, where speeds often exceed 300 kilometers per hour and there are stresses that cannot be found elsewhere, requires the use of materials that offer outstanding properties, and this is where carbon fiber helmets come into their own.

As explained above, each fiber shell is actually created in composite material. When it comes to composite fibers however, there is a tendency to identify mixed fibers and not pure ones like 100% carbon. One of the most used is aramid fiber. Due to its excellent tensile strength and breakage resistance, it is used in the manufacturing of bulletproof vests, among other things. By itself, aramid fiber is very elastic, so it has to be combined with other fibers, such as carbon and glass, in order to give the final product the proper resistance.

In general, composite fibers used together make for safe and lightweight shells, but the thicknesses needed are slightly greater than those of pure carbon fiber shells, and they weigh more.

The great advantage of these materials, which explains their widescale usage, is that they allow for the production of high level products at a more affordable price point, if compared to their big brothers in pure carbon fiber. This is how the majority of top-range sports, touring and off-road helmets are manufactured. 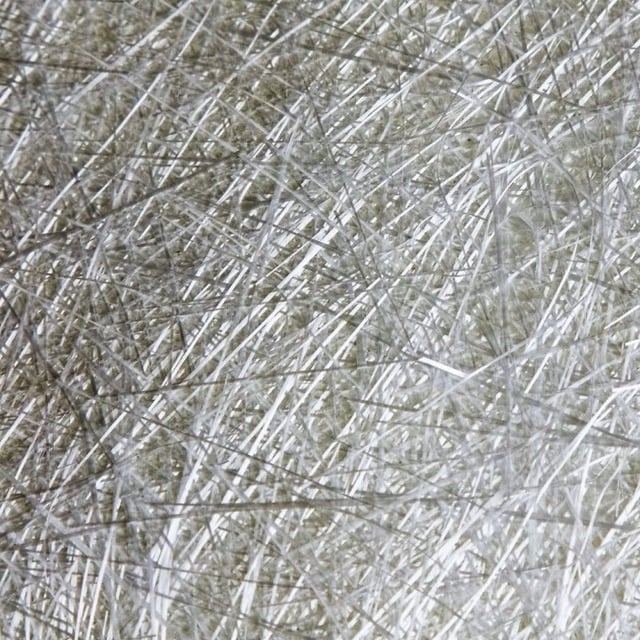 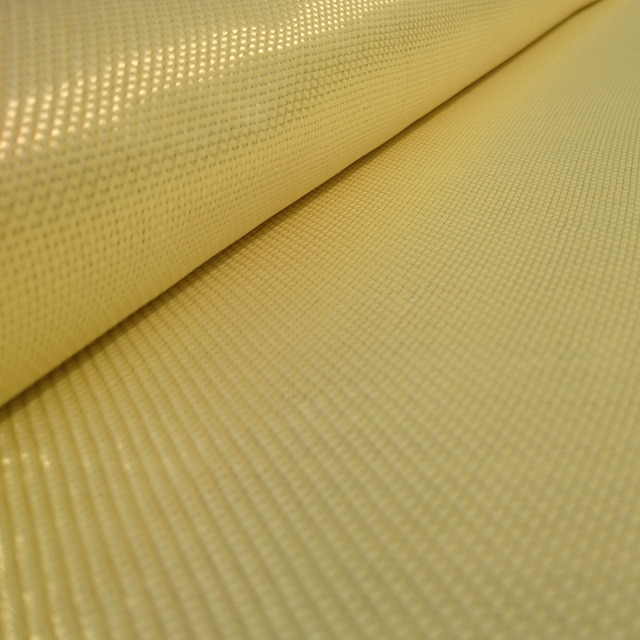 Last but not least

The last material we examine is the one that represents almost everyone’s entry into the world of motorcycles. What could be more symbolic than our first helmet? And our first helmet probably wasn't a top-of-the-range carbon helmet developed in MotoGP™.

ABS, a high-resistance thermoplastic resin, is by far the most widely used material across all segments and one that makes for safe, reliable and durable products. Compared to the various fibers, it weighs a little more but has the distinct advantage of being easily processed, allowing for simpler construction.

There is considerable difference in the complexity of processing fiber and plastic helmets. With fiber helmets, the process involves the use of molds that produce the “closed” shell. The openings (visors, air vents and holes) are made using high-pressure water jets. ABS shells are made by injecting molten resin directly into the molds, which make for the finished shell, ready for the next stages of assembly.

For short- and medium-range urban or touring use, thermoplastic resin helmets are undoubtedly a good choice, especially for those who are new to riding, or those who are not looking for featherweight or race performance. We also remind you that helmets across the range, from top to bottom, benefit in the long-term from the development carried out by professional riders, both in terms of protection, with studies regarding the width of the field of vision for example, and performance, like aerodynamics. 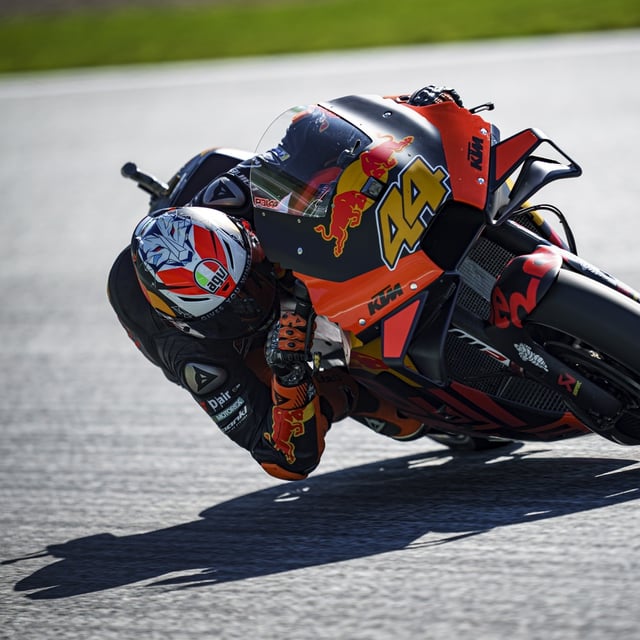 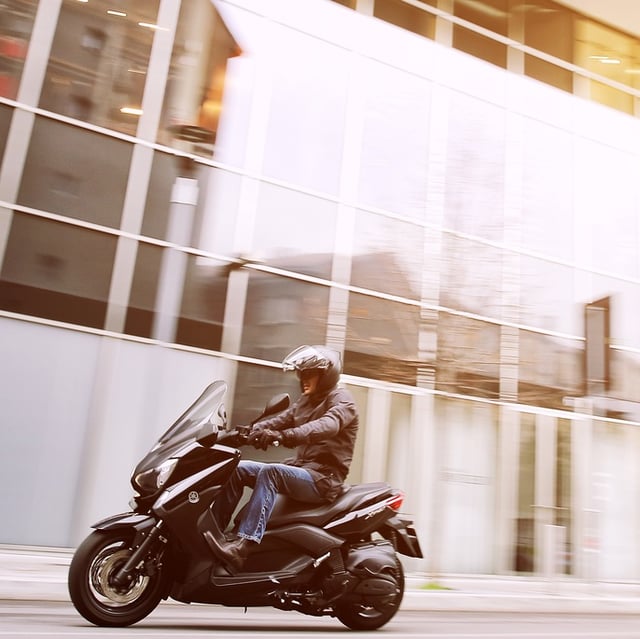 Carbon, aramid fiber, fiberglass and thermoplastic. Each material has its own strengths and reason for being, relating to a particular type of usage. Whether you want to get out on the track and break the 300 km/h barrier, or ride your  scooter from home to work each day, there is a perfect product, made with a material that best suits your needs.

What is the best insulating material for winter sports?

How can you look sporty when riding in the city?

Travel around town without hiding your personality
#Ergonomics #Protection