As we prepare for the red light to go out, whether at the crossing outside our home or on the start line at Mugello, all our weight, and that of the bike, is on one or both of our feet. Balance is fundamental when a professional rider starts their race, but also when they need to stop, just as it is for those who put a foot down to save themselves in an emergency situation on the road. Our feet are so important but are often overlooked. These simple examples are enough to demonstrate just how important it is to protect this part of the body, and we don't need to crash to want a pair of protective boots.

Given the importance of adequate support in this area, Dainese has always paid particular attention to the foot and ankle zones, focusing on innovative solutions and cutting-edge technologies that ensure maximum protection and performance, on both track and road.

The origins of a unique boot

Research into a revolutionary boot began in the 90s and was developed, as ever, in the motorcycle racing arena. Once again, it was together with the riders that Dainese developed an all-new and unprecedented form of protection. Olivier Jacque, 250 world champion in 2000, was already wearing the Molvena-based firm's suits on track, as did many of his colleagues, but he would often suffer ankle injuries. And so it was that Dainese designed a special boot for him, one that not only provided better protection but also prevented those dreaded fractures and sprains.


In 1997 the IN boot made its debut, the first motorcycle boot in history designed to be worn inside the suit. A revolutionary solution that turned things on their head and meant that, from that moment, it was boot inside, suit outside. The first version already involved the use of composite materials to protect the foot, while integration with the suit aimed to limit any joint sprains, among other things. 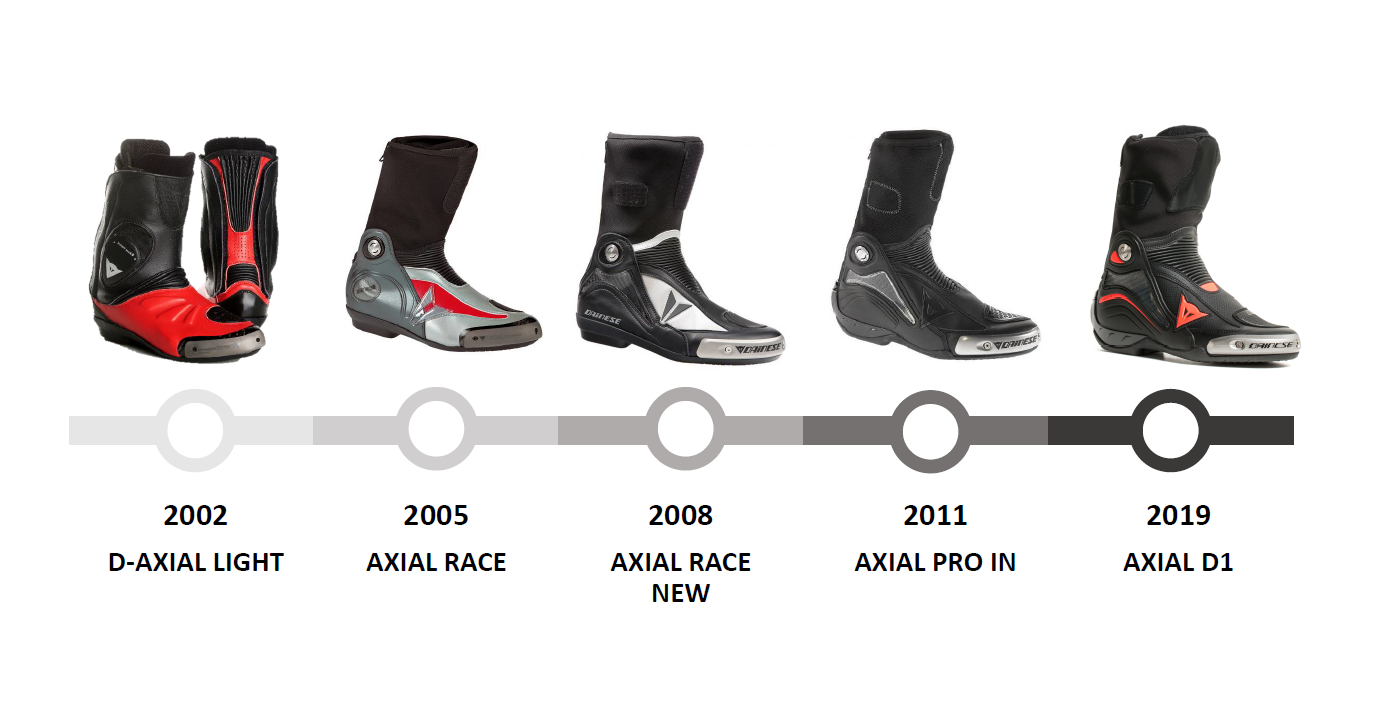 In the early 2000s, the boot gained the sophisticated Axial Distortion Control System, a jointed and ergonomic carbon fiber structure integrated into the boot and able to guide ankle movement. It was soon used in races by the rising star of the time, one Valentino Rossi. The Italian rider became an ambassador for the Dainese IN boot, taking it to victory for more than twenty years and in all its evolutions.

Since the early 2000s Dainese has incorporated a sophisticated protection system and refined materials in its boots. The racing and sport ranges of Dainese boots present a rigid but jointed structure. The unique feature of these boots is the Axial Distortion Control System, the junction that connects the lower section to the upper part, the tibia protection.

The boot is designed to protect, but it must also guarantee the rider the freedom of movement required for maximum performance on the bike. So the parts that protect the foot and the tibia are connected with a junction that allows for movement only along the longitudinal axis. Axial Distortion Control System prevents any unwanted joint movement. Lateral twisting and hyper-extension are prevented by a system that is more than just a simple component of the boot. Rather, it is a true ankle brace. 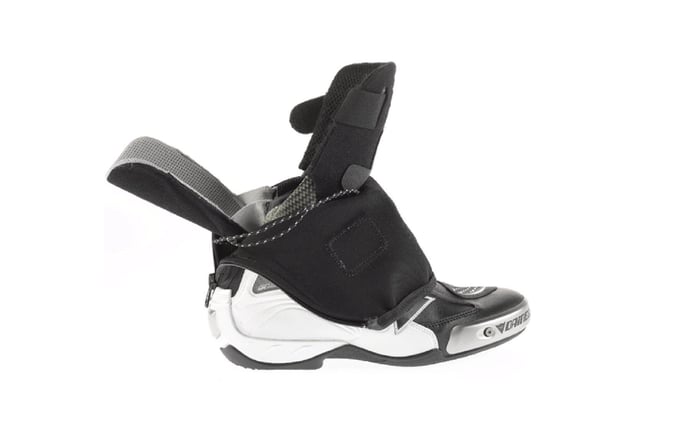 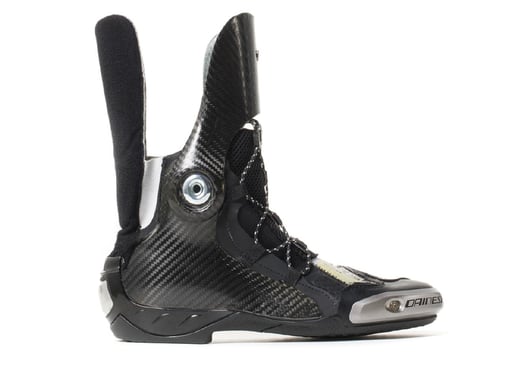 The solidity and rigidity of boots with Axial Distortion Control System are engineered and controlled so as not to have repercussions on other parts of the leg. The freedom of movement guaranteed to the joint prevents the force of any impact or twisting being transmitted to the knee or hip.

In the top-of-line boot, used by MotoGP riders and available to everyone, this complex jointed structure is fully integrated inside the footwear and comprises just one single material. The lower section and tibia protection are created in a carbon and aramid fiber composite, for an extremely solid, protective and lightweight boot. The bootie in composite material concealed inside the upper ensures unparalleled safety across the entire lateral area of the foot, the heel, the tibia and the calf. The resistance of carbon and aramid fiber make for an exceptional anti-perforation shield that protects against any object that might impact against the foot, the ankle area or the tibia; it also prevents compression. This is all to be found in an extremely slim and compact boot, to be worn inside the suit. 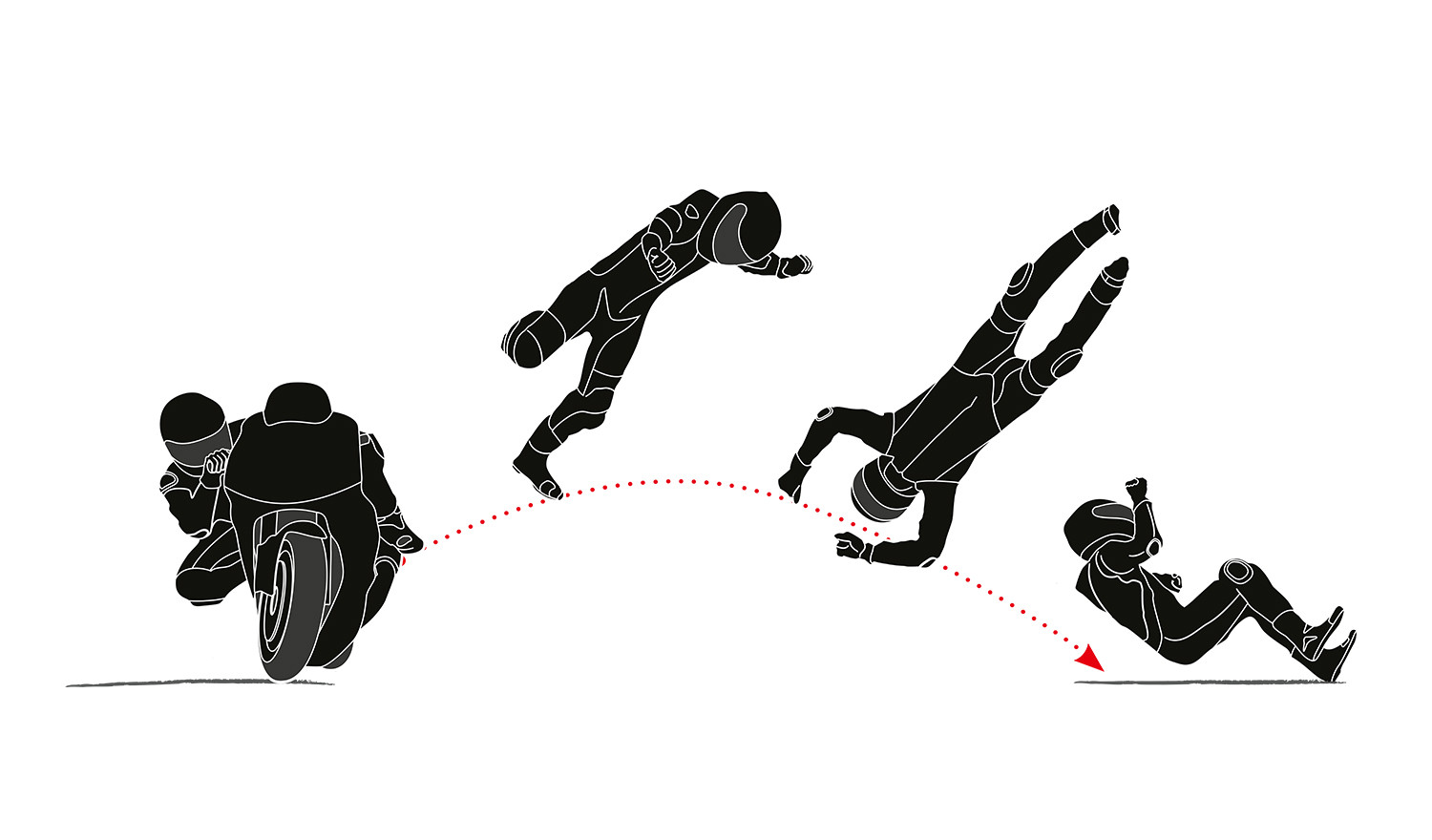 The composite fibers allow the Axial Distortion Control System to provide maximum protection while also achieving a record level of lightness for a racing boot. As well as the suit-boot integration system, the Dainese boot counts limited weight among its strengths. Lightness around the extremities, whether the feet or hands or on the head, is an aspect that is often ignored but is of crucial importance. In case of a fall, particularly a high side, where the rider is thrown from the bike, less weight at the extremities means the development of less centrifugal force. Less centrifugal force means less speed and, consequently, a less violent impact against the ground, with all the benefits this brings.

During decades of experience in the racing arena, Dainese has developed and evolved increasingly protective boots able to support the performance of professional riders. Over the course of the last twenty years, the Axial Distortion Control System has been harnessed in various versions before covering the entire sport boot range, for use on track and road alike. Fans thus benefit from maximum safety in terms of the foot and ankle joint, just like the riders in the world championship. 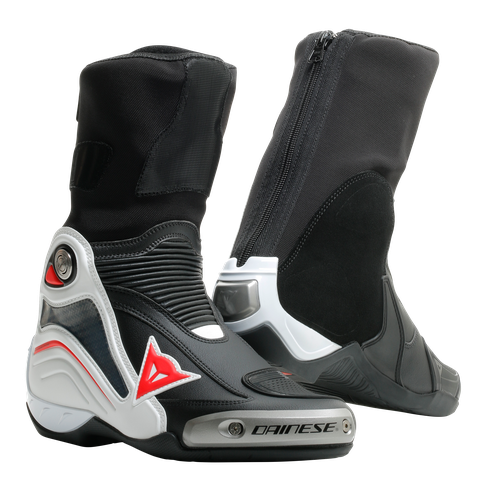 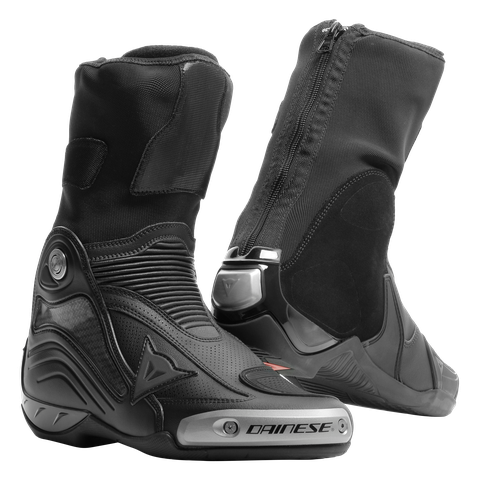 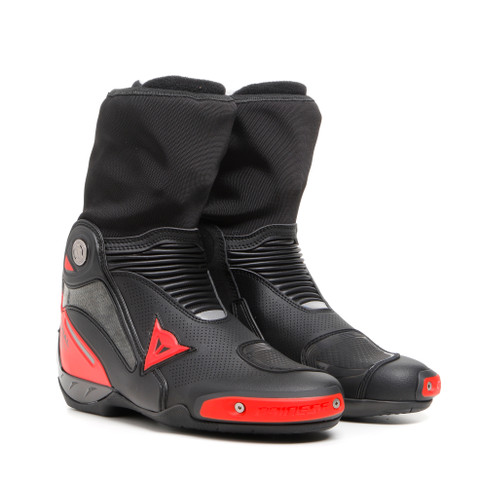 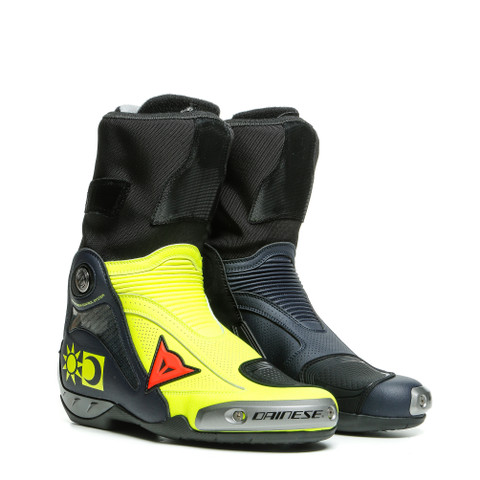 The world’s most advanced ankle protection system, in the words of a legend
#Innovation #Protection
Motorbike | Tech