A lot has happened at Misano, the track having gone down in world championship history. We have seen the good, the bad, and the very bad, just as we have at all tracks. But in the days leading up to the GP we remember the good, and for me Misano is all about the great battles at Brutapela, the last corner of the original track created in 1972. Interestingly, Bruta Pela was the nickname of the farmer who had given up his land. It was a left-hand corner that narrowed - you’d take it at an angle, setting up the exit - and it was finished off with a slight left/right ‘S’. The turn lent itself to desperate last-gasp attacks, where you give it all you’ve got, but there was only one trajectory out onto the straight, and any contact was hard...

I remember Walter Villas’s blows to Johnny Cecotto’s fairing in a 250 race in the late seventies, and the head to head battle between Luca Cadalora and Helmuth Bradl in the ‘91 250 race, an incredible fairing-to-fairing sprint to the line. I asked Luca, the winner by nine thousandths of a second, “Who started it?” “I don't know,” he said, “but I had my elbow in front of his and wasn’t giving up...” In those days there were no sanctions and the FIM would let it go. Riders might fight but then they’d put it behind them. But the most intense and memorable episode in my opinion dates back to 1987, when Aprilia scored its first historic world championship win. 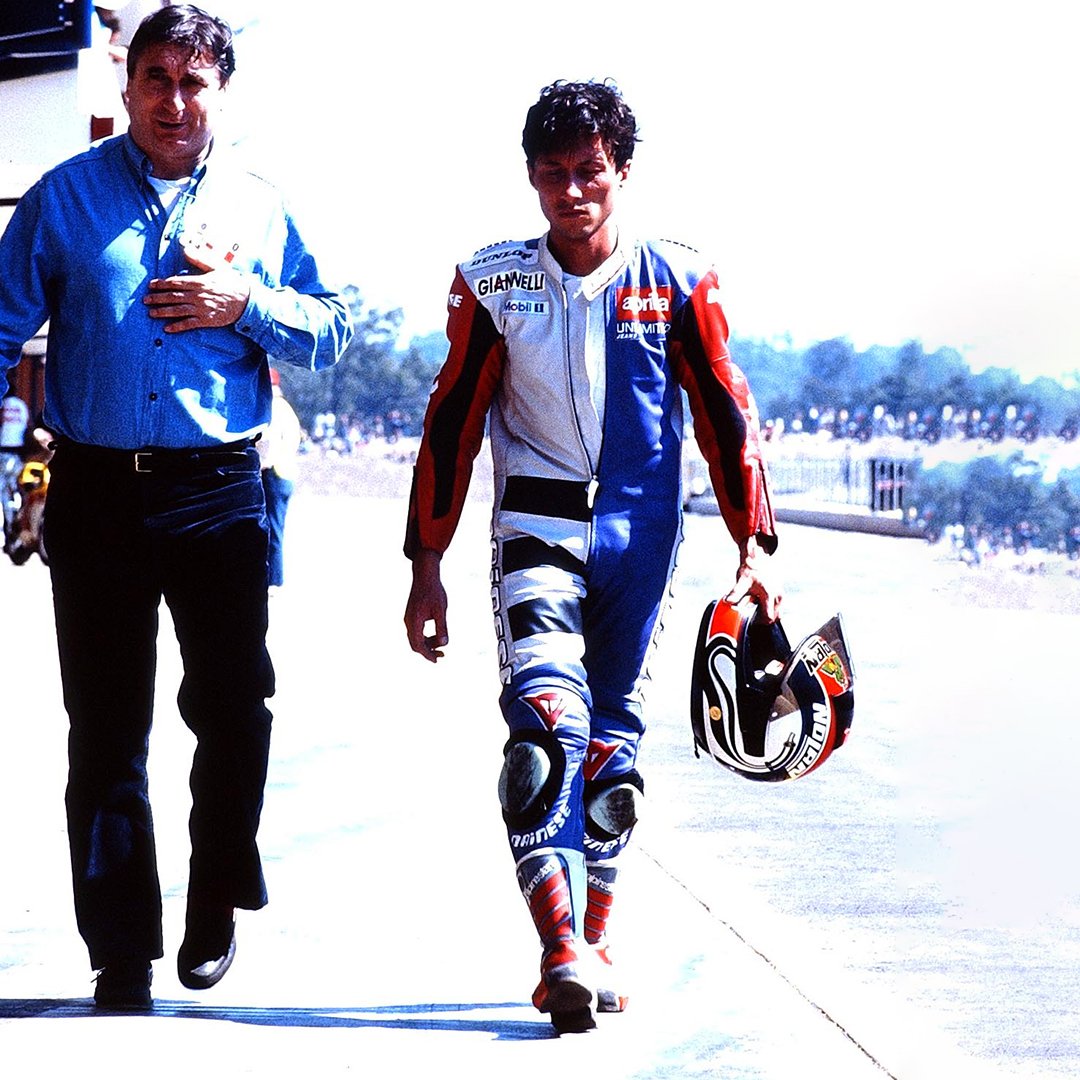 Aprilia lands in the world championship

It was late August, it was very hot and there was a strange air around Loris Reggiani, a great deal of passion, trust and affection for the rider, but also fear. In that small team that had been on track with the AF1 250 for a couple of years, people would dream and knock on wood at the same time, because the bike was there but would easily break down, and the rider would often get into trouble, a combination of foolishness and bad luck.

Aprilia was already an important manufacturing firm, producing innovative and colorful bikes and winning races in trials and motocross. It arrived in the world championship with this external team, which Florence-based Michele Verrini suggested to Ivano Beggio. The CR1 Racing team, based in Forlì, was formulated around rider Reggiani and the AF1 250 bike with Rotax engine. It was a tandem-twin with rotating disc, not too recent, sharpened in its power delivery, and tougher to use than the competition with reed valves. It made its debut in '85 and soon scored two podiums, but then '86 proved to be a disaster because a road accident left the rider with multiple pelvis fractures and a permanently damaged ankle.

The 1987 season got off to a bad start, with three retirements in the first three GPs, but then the Nations pole at Monza confirmed their power and speed, and this was quickly followed by two second places at Salzburg and Rijeka in June. Then came a few mistakes, but Loris was still second at Donington, despite squeezing into a suit that was too tight, and then third at Anderstorp despite the piston seizing, a DNF at Brno. And then came the San Marino round at Misano, the track now dedicated to Marco Simoncelli. 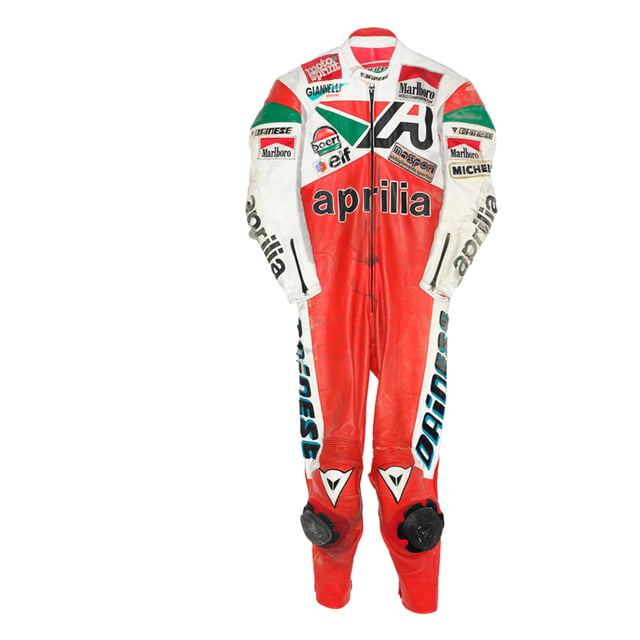 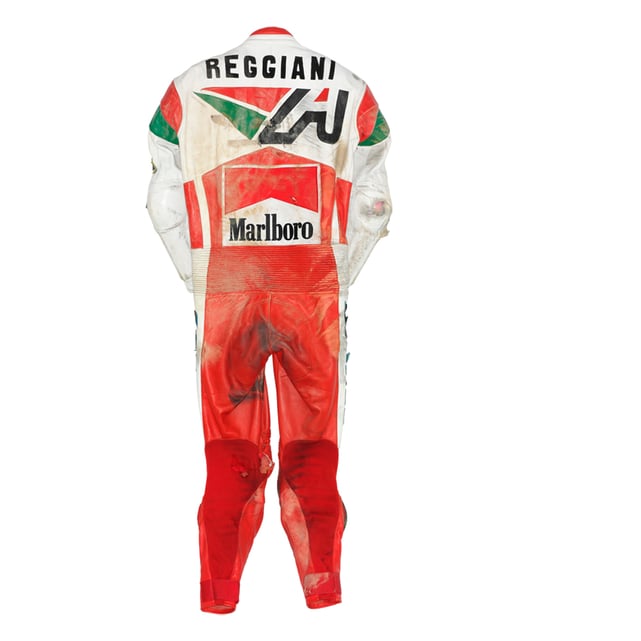 I remember Reggiani making a good start from the front row, Cadalora was on pole alongside Ago's Yamaha, and then Loris started to break away, gradually increasing his lead. As his advantage over the chasing pack grew, so did the anxiety levels on pit wall, where Verrini, Benito Savoia (!), Leandro Rambelli, Dolph Van der Woude and trusty "Ciutur" (aka Loris Montanari) didn’t know whether to laugh or cry. "If I didn’t have bad luck, I’d have no luck at all," as Loris often says, but that day "lady bad luck” was evidently distracted or looking elsewhere...

He crossed the line 7.9 seconds ahead of Luca Cadalora, who set the fastest lap, eleven seconds ahead of Sito Pons. And then, further back, all the big names from Sarron to Wimmer, from Mang, who would become world champion, to Garriga. An enthusiastic Ivano Beggio, who was at Misano with his wife Tina, was convinced that the world championship was within Aprilia's reach and decided to invest in a real racing department, an internal structure, in Noale. This was a fantastic idea, as five years later they won their first speed title with Gramigni and the 125, and then came Max Biaggi, who would dominate the 250 class from '94. And that racing department is still among the best in the world today.

Can just one victory create a phenomenon? On that occasion, 30 August 1987, it did just that. The passion and commitment of a group of friends had worked a miracle, with Misano and its track as the stage.

Nico Cereghini: how to ride in the wet

The right equipment, gentle use of the throttle and brakes and feeling with the tires.
#Protection