Protecting a legend in road racing

Protecting a legend in road racing

The Tyco team’s GSX-R 1000 cuts through the air on the Sulby straight at over 300 kilometers per hour. Soon later, it darts through Ramsey, faces the turn and the Gooseneck, a launchpad towards the mountains. A legendary tarmac belt that sinuously runs through green Manx grasslands before going back down to Bray Hill and the finish line.

It is the 60,7-kilometer Snaefell Mountain Course at the Isle of Man, the oldest and the world’s most famous racing circuit. Guy Martin is riding his bike, wide-eyed, observing what is happening tens of meters away of his front tire. At the 2014 Senior race, the most prestigious one, the third step of the podium is waiting for him, next to two living legends: Michael Dunlop and Conor Cummins.

It is the Tourist Trophy. The road race. From 1907 to date, there is who has racked up 26 victories, who 10, who just one, and those who have never won. A 33-year-old youngster from Grimsby speaking his own language is among those who are still waiting for real glory. 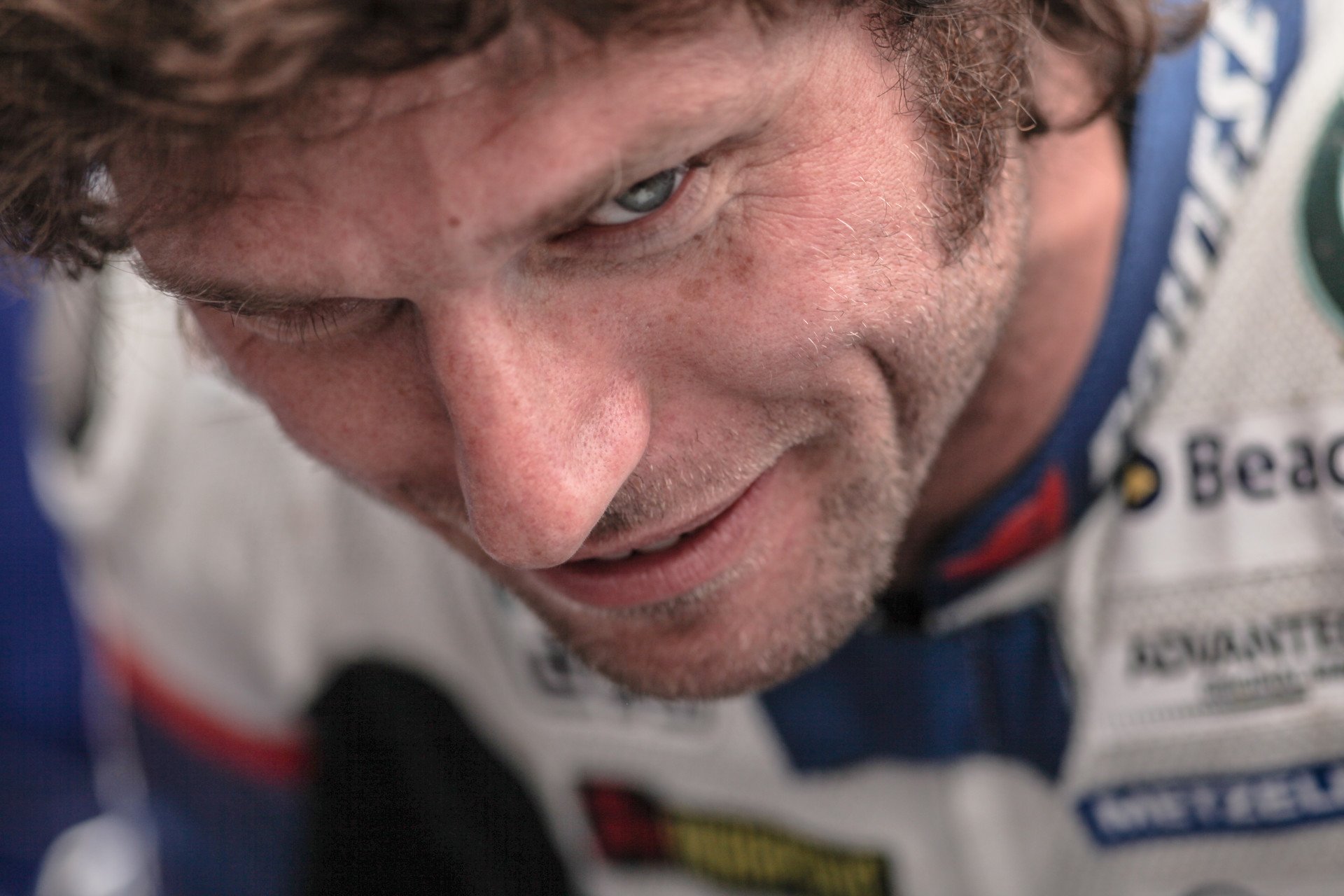 He made the tune of 9 podiums at the Isle of Man, together with several scars. However, he has never been able to hold the cup with the Winged Mercury higher than anybody else. Guy keeps on thinking about it, about those scars, especially now that he is dangerously getting close to that right turn in front of the Creg Ny Baa pub. He would prefer to stop and eat a platter of fish and chips rather than coming in third nearly half a minute slower than Dunlop.

Yes, scars. Like those back in 2010, probably the most difficult ones to forget. Senior TT. Guy rides the beautiful Wilson Craig team’s Honda with a red and silver special livery. He has been in command until a few moments before, on the edge of thousandths of a second against an unstoppable Ian Hutchinson. It is the third lap and the CBR approaches the Ballagarey corner at 270 kilometers per hour. A bit too fast to avoid one of the most terrible crashes in TT’s history. 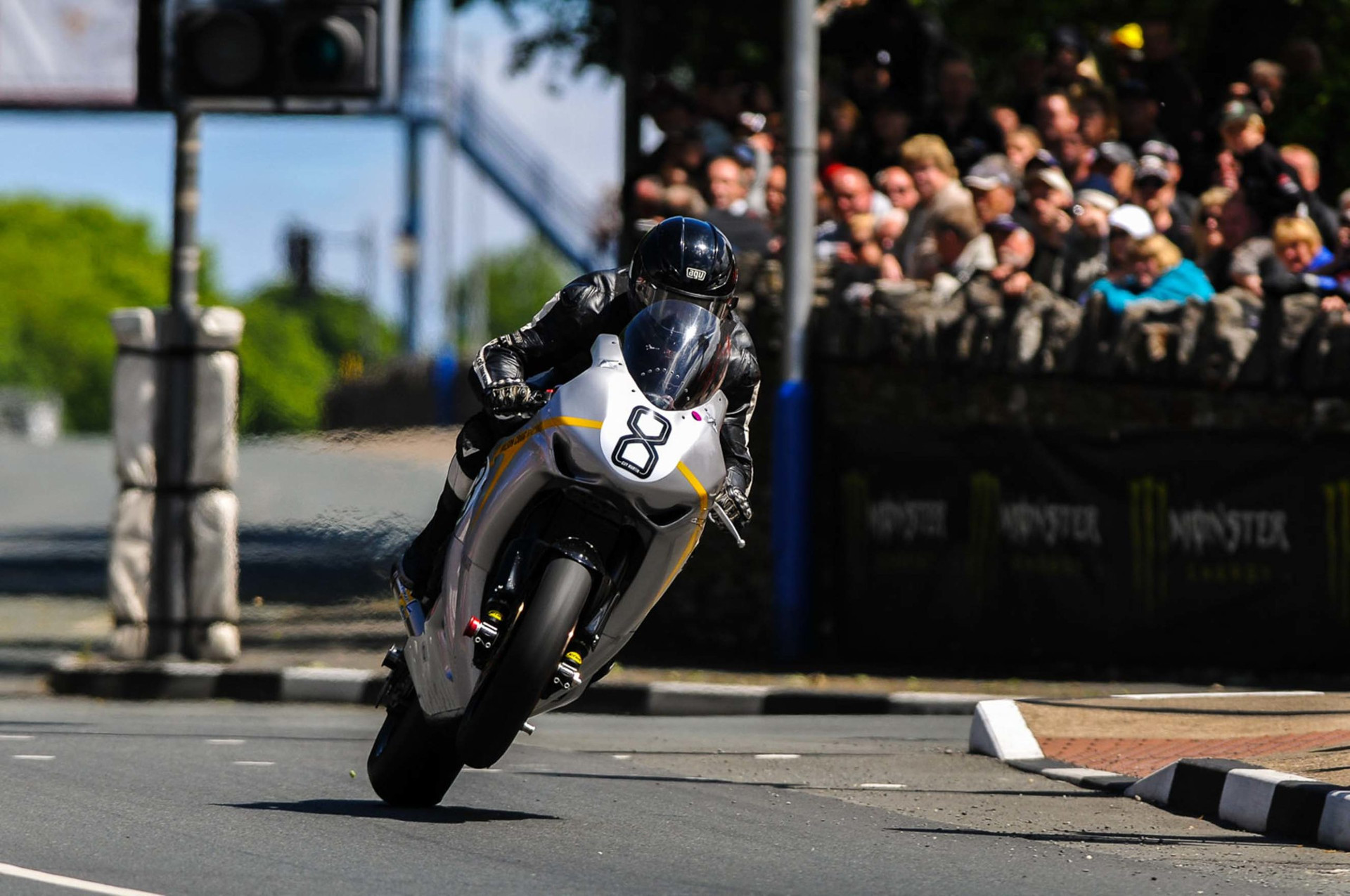 The Honda hits the pit outside the corner and turns into a fireball. Guy falls from the bike, hits the pit and slides on the asphalt in the middle of the street. He is alive; he could be better, but he is in one piece. He is brought to the Noble hospital with singed eyebrows. He still does not understand the reason why. Soon later, once he sees the pictures, the situation seems clearer. A few days after, he is already thinking about his participation to the Southern 100 next month.

Guy thanks heaven and even more who designed his gear and protectors. Helmet, suit, boots, gloves, back and chest protectors. Guy mainly focuses on this last one: the chest protector. He started using it a season ago and it has saved his life already. He cannot imagine what would have happened if he were not wearing a back protector. A few bruises are there in any case. 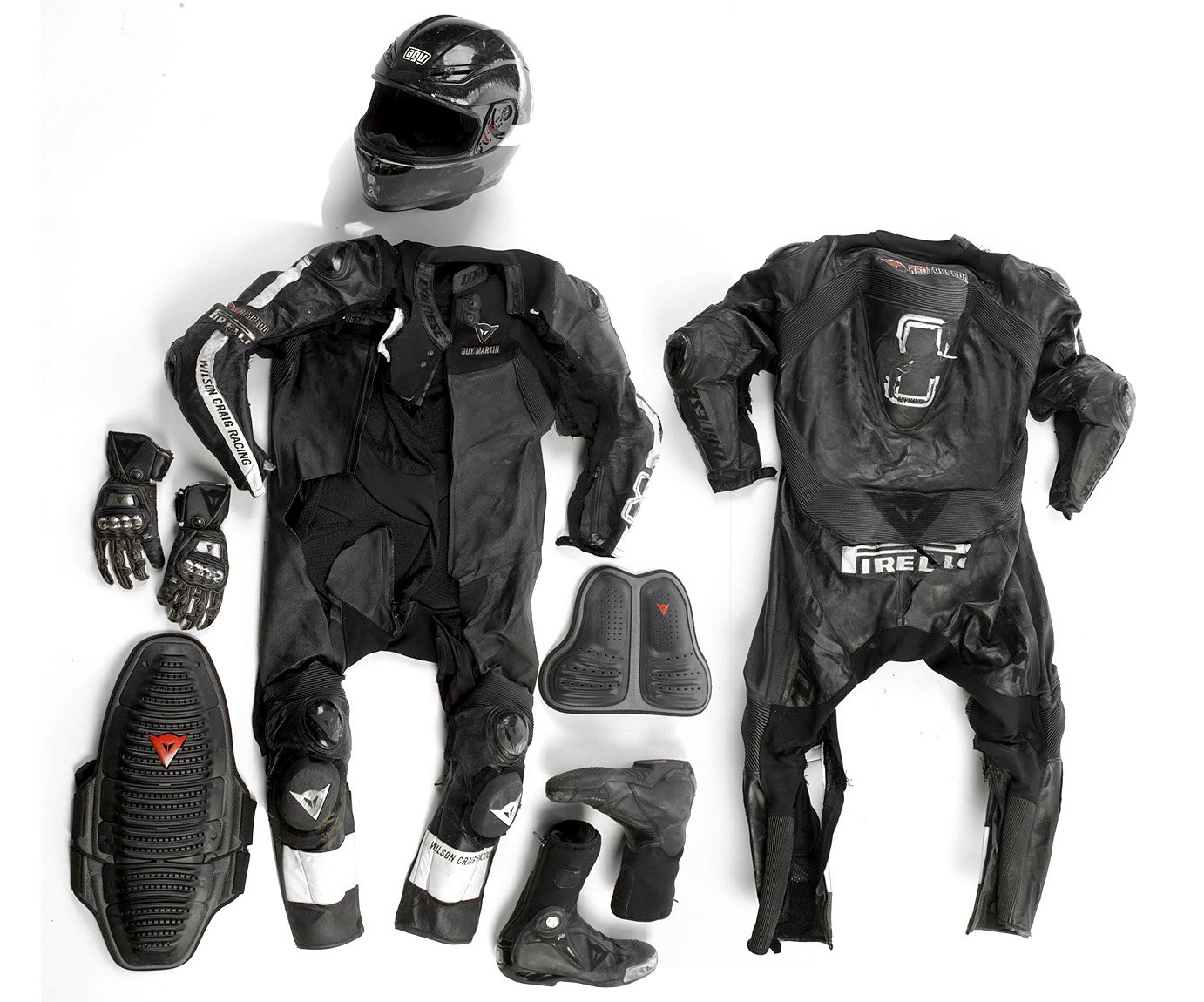 The helmet is relatively in good conditions, besides a couple of deep grazes. Boots and gloves, made of leather, carbon and aramidic fiber, saved his hands and feet; not a scratch on them. The suit is the one that looks worst, not because of the fall but because ER doctors had to cut it. Looking at the photographs of the accident, you would never imagine that he had to deal with so little.

Guy is perfectly comfortable while going towards the Grandstand and the checkered flag today. He is aware that his Dainese can best protect him in every situation, as always. He could not be safer if not on his couch at home. The white and light blue suit features a cutting-edge airbag technology that covers collarbones and shoulders with a patented airbag shield.

The D-air® Racing has been introduced since a few years in track racing and been developed by his MotoGP colleagues – Valentino Rossi, among others. The system had to be refined for road racing as the algorithm had to learn the difference between a fall and stress typical on road circuits. It has been challenging for Dainese, as staff had to understand how to manage unusual situations, such as the Ballaugh Bridge or the wheelie at 270 kilometers per hour on the Ago’s Leap. 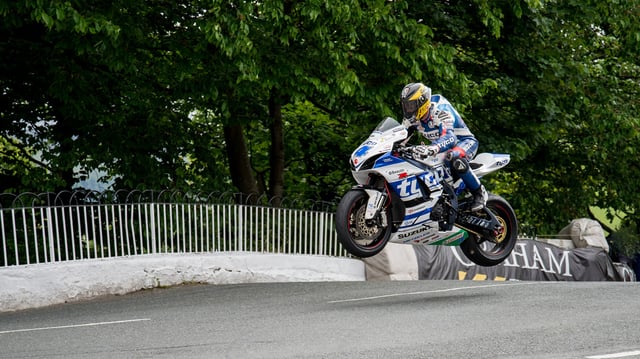 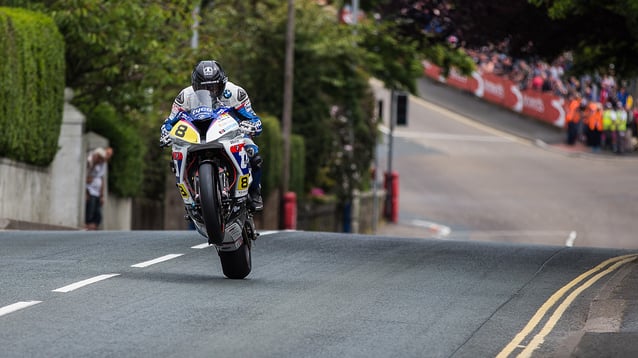 The Dainese R&D department has always exploited the most extreme testing grounds to develop new products. What better than the Tourist Trophy, then? Riders are the first and most demanding testers, but the benefit trickles-down to mass production and becomes for everybody.

Guy knows it, this is also part of his business. It may seem ironic but riding at insane speed between pits and streetlights is increasing safety for every motorbike rider, both professional ones and simple enthusiasts that head to mountain passes on a Sunday morning.

Just a few hundreds of meters to the Glencrutchery Road finish line. Guy focuses on the last steps, the slowest ones on the streets of Douglas, the capital city of the Isle of Man. Another podium is waiting for him. Uncorking champagne is always a good time, even if he has to stop at the lowest step, once again.

This will be his last podium riding a 1000. He will score another one the next year riding a 600 and one at the Zero TT in 2017, the twelfth in one of the most argued and on-the-spot careers of the last years. He never won but he was able to achieve many results and successes lost by a whisker, such as the 2010 Supersport, given to Hutchy for three seconds only. A life spent pushing his limits, where speed was never enough.