The history of Dainese in mountain bike started at the beginning of the ‘90s. Philippe Perakis, a young athlete in this newborn sport, showed up at the Dainese booth at the Köln motorbike show, asking to speak with Mr. Lino.

He carried a motorbike protector, a Dainese safety jacket. But, with his mother’s help, he adapted it applying additional carbon-fiber plates. Although being a homemade experiment, this represented the expression of the rising need for protection. Consider that, back then, what was available to riders was something like a cross country bike. The travel of the suspensions was limited, if not completely absent, yet speeds were already high: there was the need to adapt apparel accordingly.

Perakis found in Dainese a breeding ground and a long and fruitful collaboration was established. The need of an athlete coupled with Lino’s intuition soon led to the creation of a one-piece suit specifically meant for downhill: the Overboost. This new suit was a combination of lycra and composite protectors on more exposed areas: shoulders, elbows, knees, thighs, the chest and the neck. The back protector was introduced since the very beginning, as it was used in the motorbike world since ’79 and was already at its second generation.

Perakis soon gained notoriety, making his extravagant look and the way he dressed up one of his hallmarks. He looked like somebody brought from space into the mountain bike environment. That is why a few called him “the astronaut”. His performance made the news. Feats unconceivable until then without proper equipment.

Philippe was the first one to exceed 100 km/h on a mountain bike. He made it at the legendary Mammoth Kamikaze, the race at Mammoth Mountain in California. The Kamikaze was established at the end of the ‘80s and everybody remembers it as one of the craziest downhill races. Riders threw themselves down the mountain’s peak, 3000 meters high, along fire roads, riding bikes that had the most basic suspension ever.

Among other achievements, Perakis made history touching 200 km/h in Vars, France, always protected by Dainese. The fact that protection was absolutely necessary and it proved not to affect performance, soon convinced many others to wear the Dainese brand. 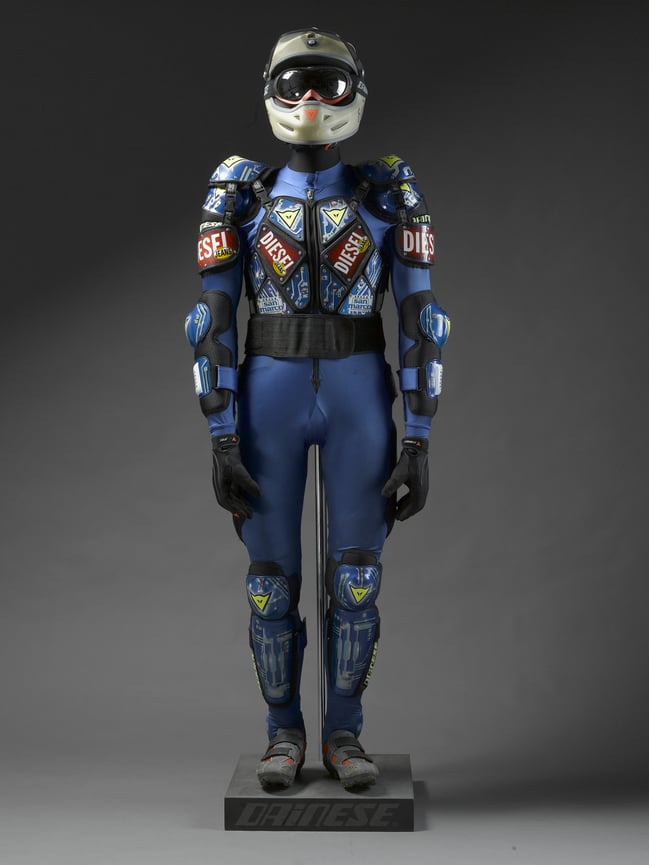 In 1995, the Mountain Bike World Championship took place on September 19th in Germany, in Kirchzarten. Nicolas Vouilloz, 19 years old back then, beat the competition and won the first of seven Downhill Elite world titles, counting already three in the Junior Championship. Vouilloz was the first champion to wear Dainese and was the one who brought the brand to the fore on the downhill international scene.

At the end of the ‘90s and in the early 2000s, all top riders wore the Speed Demon. From Fabien Barel to Cedric Gracia, from Shaun Palmer to Anne Caroline Chausson. It was with this momentum that a complete range of protectors was developed. Mountain bike was becoming one of the most important action sports, facing a fast and relentless evolution that turned bikes just a few years old out-of-date already. 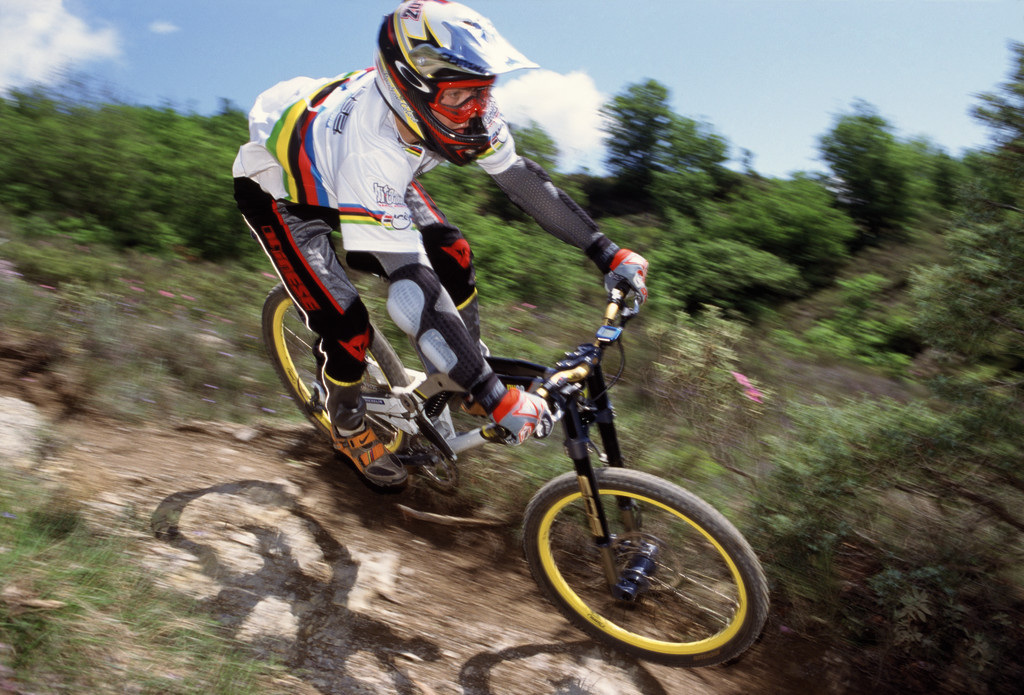 Apparel, and protectors in particular, had to keep up. These were the reasons that led to move from simple protectors used in the very beginning to more advanced technologies. Jointed knee guards, ever more comfortable, light and effective safety jackets, new solutions and cutting-edge materials resulting from research and scientific studies. In some cases, this process led to the introduction of soft protectors instead of hard ones, to put athletes in the best condition and fulfill top riders’ every little request. Those of champions are always fundamental indications, also for mass production. They enable everybody to benefit from their intuitions.

As often happens, it is from basic prototypes that great ideas are born. Motorbike world champions used old visors as their knee sliders. Perakis rethought a motorbike protector, adjusting it at home with his mother’s help. After all, it is always like this. Inspirations that change the evolution of a sport and enthusiasts’ minds forever, often come from the most extreme testing grounds, from competitions at the highest levels.

Integration between protectors and the IN system
#Protection #Performance
Winter / Tech