Riders, teams, technical sponsors, organizers and hospitality staff. The MotoGP paddock comprises thousands of staff members who travel together throughout the year, from one corner of the globe to another, one big family that gives rise to a small town, built and then taken down in the space of just a few days, ready to reappear at another circuit.

For decades, Dainese has also been a resident and protagonist with its D-mobile unit, a true workshop on wheels that can follow the riders closely and support them in every way.

But how much and what kind of assistance does a World Championship rider require during a race weekend? 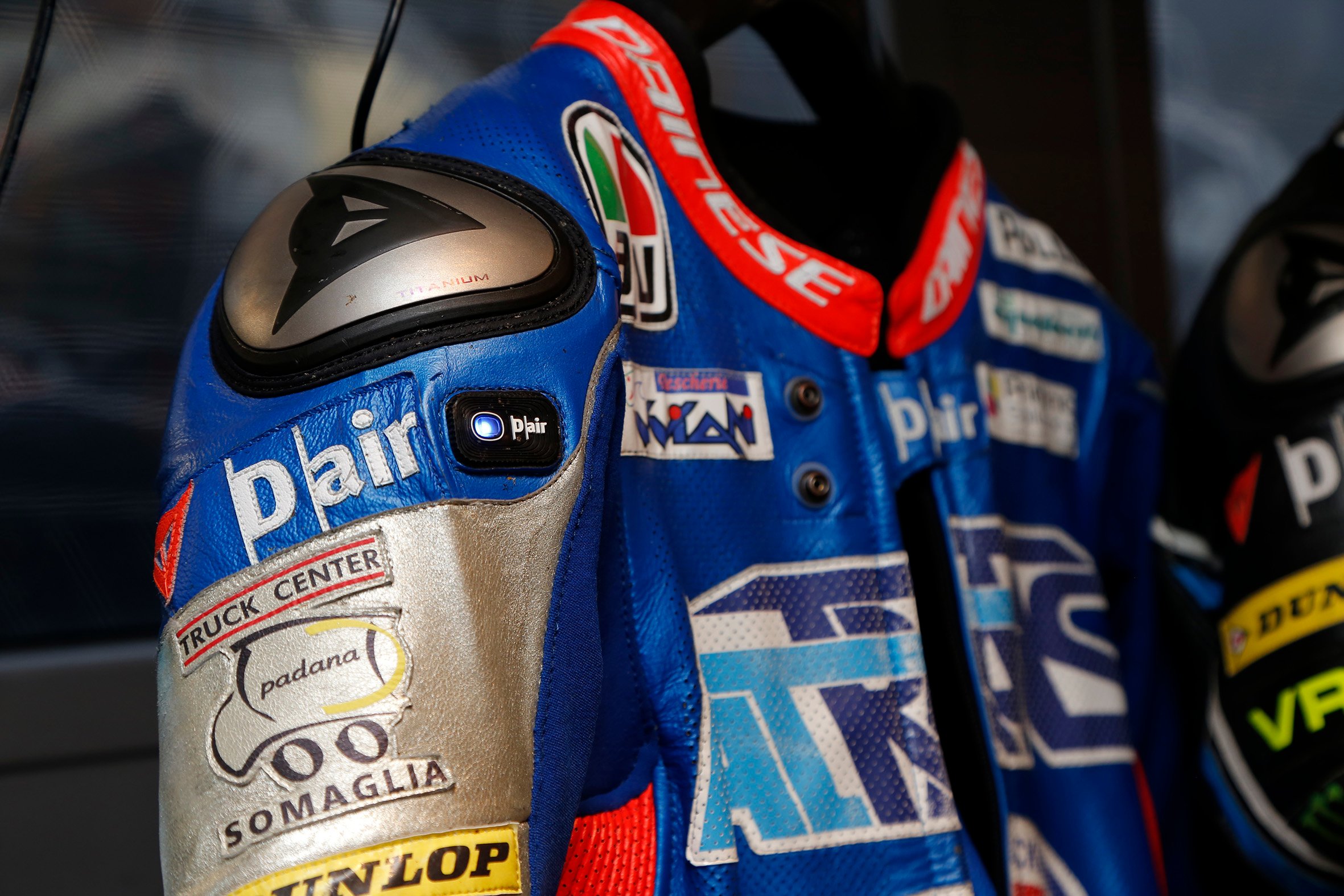 A look at the figures

Let's start with a few numbers... Every rider needs at least four suits per race, to ensure they will not run out of kit if they crash during practice, but mainly so that they are autonomous in the case of several races over consecutive weekends. Overall, however, everyone ends up using between ten and twelve suits in a regular season. Bear in mind that an undamaged suit will be used for more than one race of course. Inside the Dainese D-mobile unit, at the beginning of each race weekend you can count between fifty and sixty suits on average.

The many activities carried out in this laboratory are key in allowing riders to fully express themselves on track. After each track session, the freshly used suits are brought to the D-mobile unit, where qualified Dainese personnel will fully restore them ready for the next session.

The first step is to download the data collected by the D-air® airbag system control unit. This process is always carried out, regardless of whether or not there has been a fall. The data is collected and sent to the R&D department in Molvena, where it is analyzed to see whether there is any information useful for improving the activation algorithm. While the data is being downloaded, the system battery is recharged. 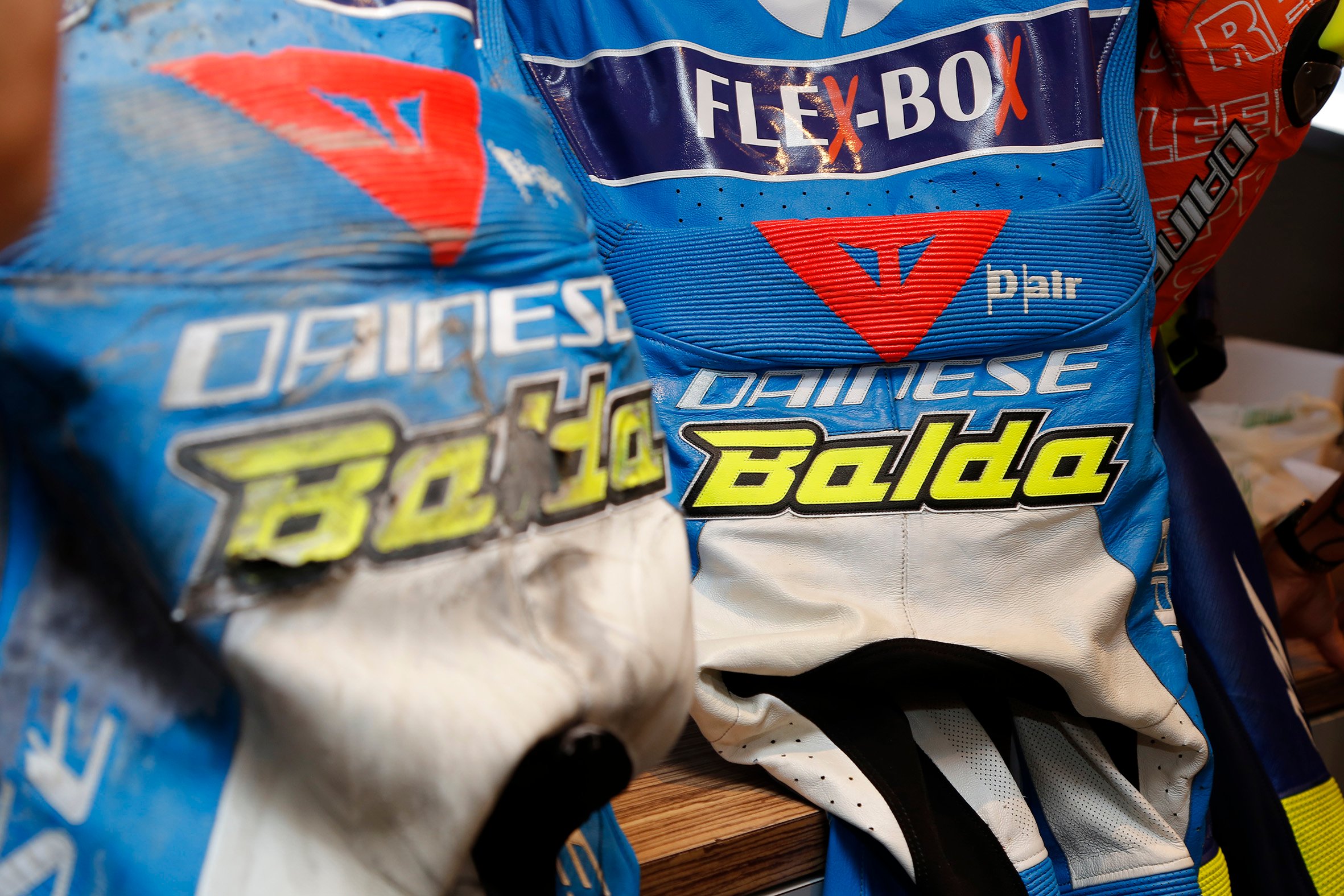 The next step is drying, carried out inside a special cabin that uses hot air jets. This is an extremely useful procedure during both very hot races, where riders sweat a lot and the suit can weigh as much as 1 kg more than it does when dry, and rainy weekends, where the suit gets wet for obvious reasons. In addition to drying, special products are used to sanitize suits. All this guarantees riders the same comfort as when the suit was first removed from its packaging.

Another operation, though this is not carried out systematically, is airbag replacement following activation. This doesn't happen very often, because falls that result in D-air® inflation usually cause such damage to the suit that it can’t be reused. In particular cases, however, especially if the track surface is wet, the leather of the suit resists abrasion and remains in perfect condition.

Once these simple but vital operations are completed, riders can collect their equipment, their suit, but also boots, gloves and new protectors, where necessary. In 2018, and with a greater number of riders to follow due to the airbag system becoming mandatory in all classes, the structure doubled in size and there are now two trucks that travel, both fitted out with the same equipment. 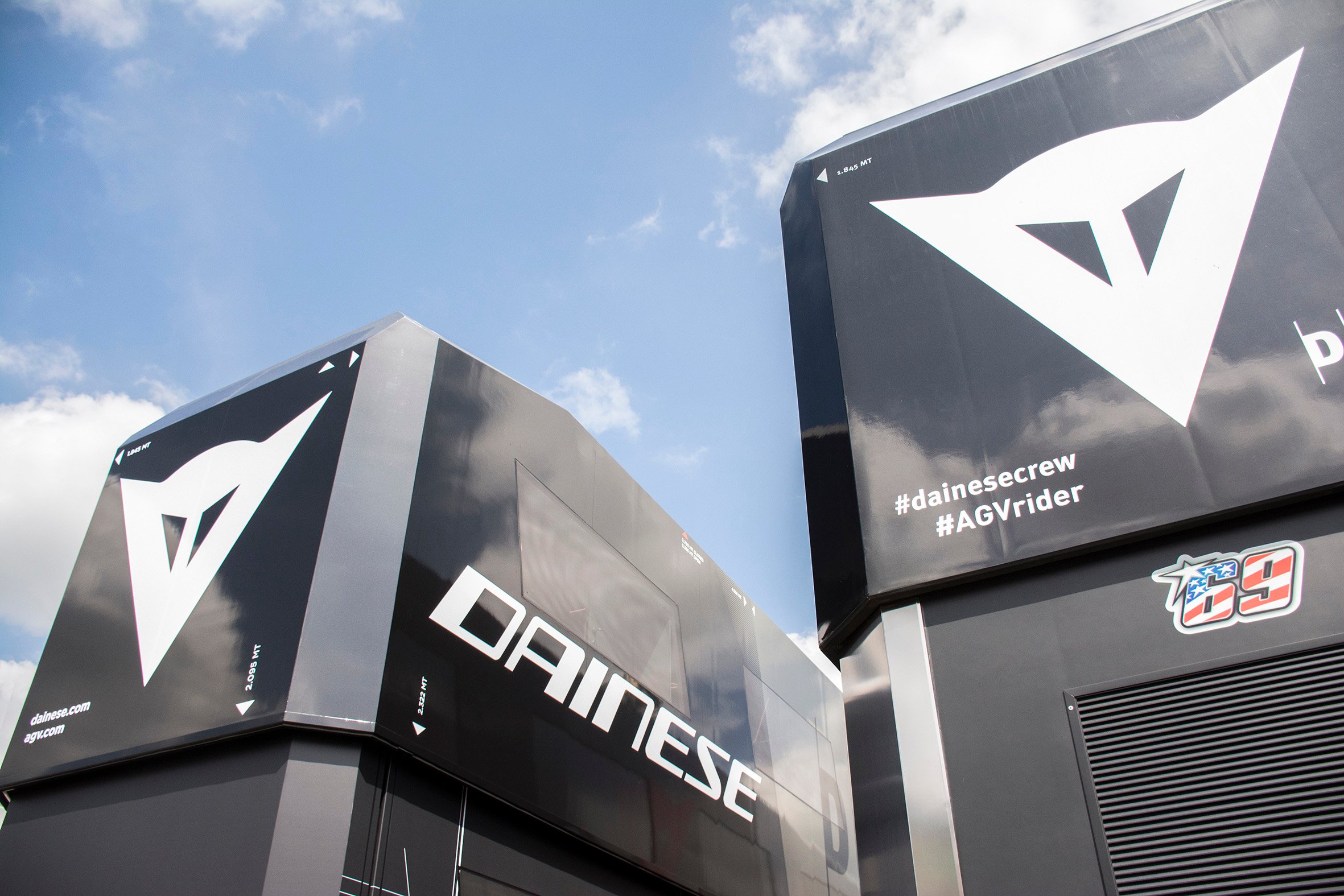 Don’t be misled by the name D-mobile, because the structure is also home to AGV rider helmet support. A specialized technician takes care of all operations needed to keep the helmets in perfect working order. From the moment the shell leaves the designer's workshop to its arrival at the track, every step of its assembly is executed with care, to give riders the very best. Like the suit, the insides of helmets are dried and sanitized between sessions.

More so than suits, helmets require a set-up change when weather conditions change. During wet sessions the dark visor is often replaced with a light or smoked intermediate visor. The rain visor is also made of a double layer of material, to create an intermediate chamber that prevents fogging by reducing the temperature differential between the inside and outside of the helmet. The air vents on the front of the shell are partially covered to prevent water from entering, which could encourage the creation of condensation. 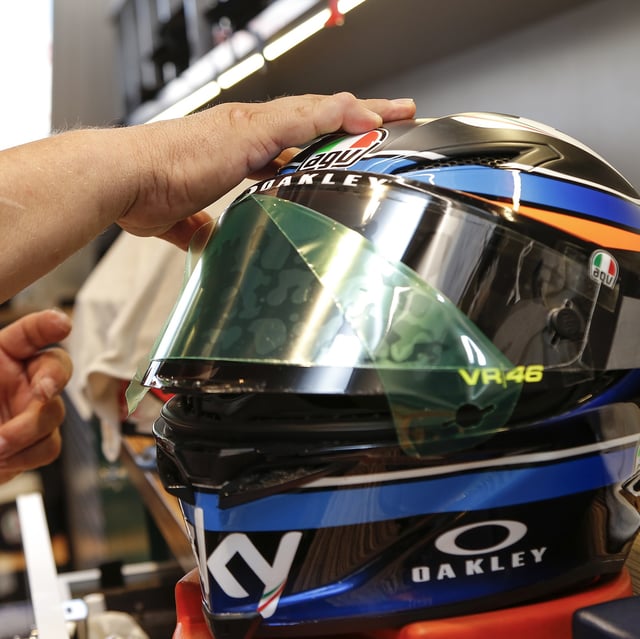 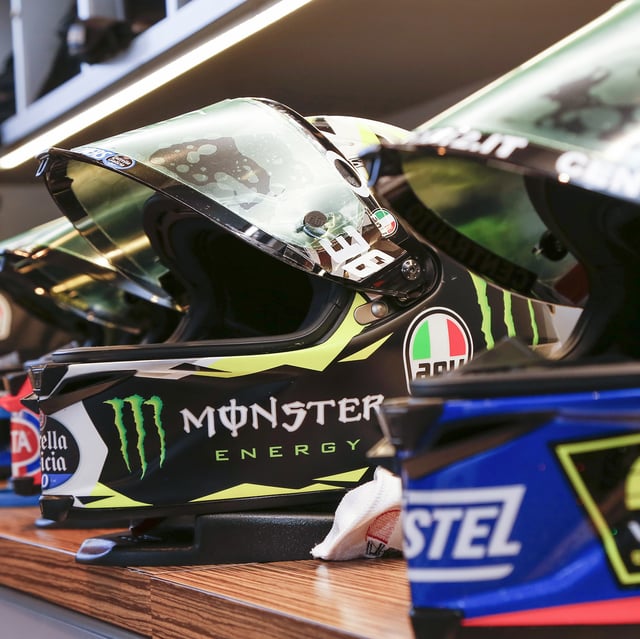 The Dainese D-mobile units are, to all intents and purposes, mobile laboratories that travel from one end of Europe to the other. Every year they visit at least twelve different circuits, those hosting the European World Championship rounds, covering an average of about 30,000 kilometers. The days the trucks and the Dainese team are away from home amount to more than a hundred and twenty. And that’s without counting test sessions and non-European rounds, which amount to about another fifty days.

We’ve come a long way since the 1970s. Back then, a couple of suits had to suffice, and these had to last for almost the entire season, at the risk of unsophisticated repairs that were not always reliable. In today’s era the riders are athletes, and every detail must be checked with meticulous care, from the set-up of the bike to the rider and their equipment.

This is why D-Mobile never stops racing alongside the riders, whatever the conditions.

What makes a MotoGP™ glove?